The Witcher 3: Wild Hunt's the Continent is sprawling with fearsome beasts, power-hungry politicians, and uncharted territories that a small town peasant wouldn't dare oppose. Good thing our protagonist Geralt of Rivia is no stranger to the uncanny. Equipped with a silver sword for the monsters and a steel sword for mortals, the witcher has the freedom to upgrade his blades and craft new ones as he traverse through this deadly mission.

In this guide, we will discuss the different types of Steel and Silver swords (and where to find their diagrams) that we can acquire early on in the game! 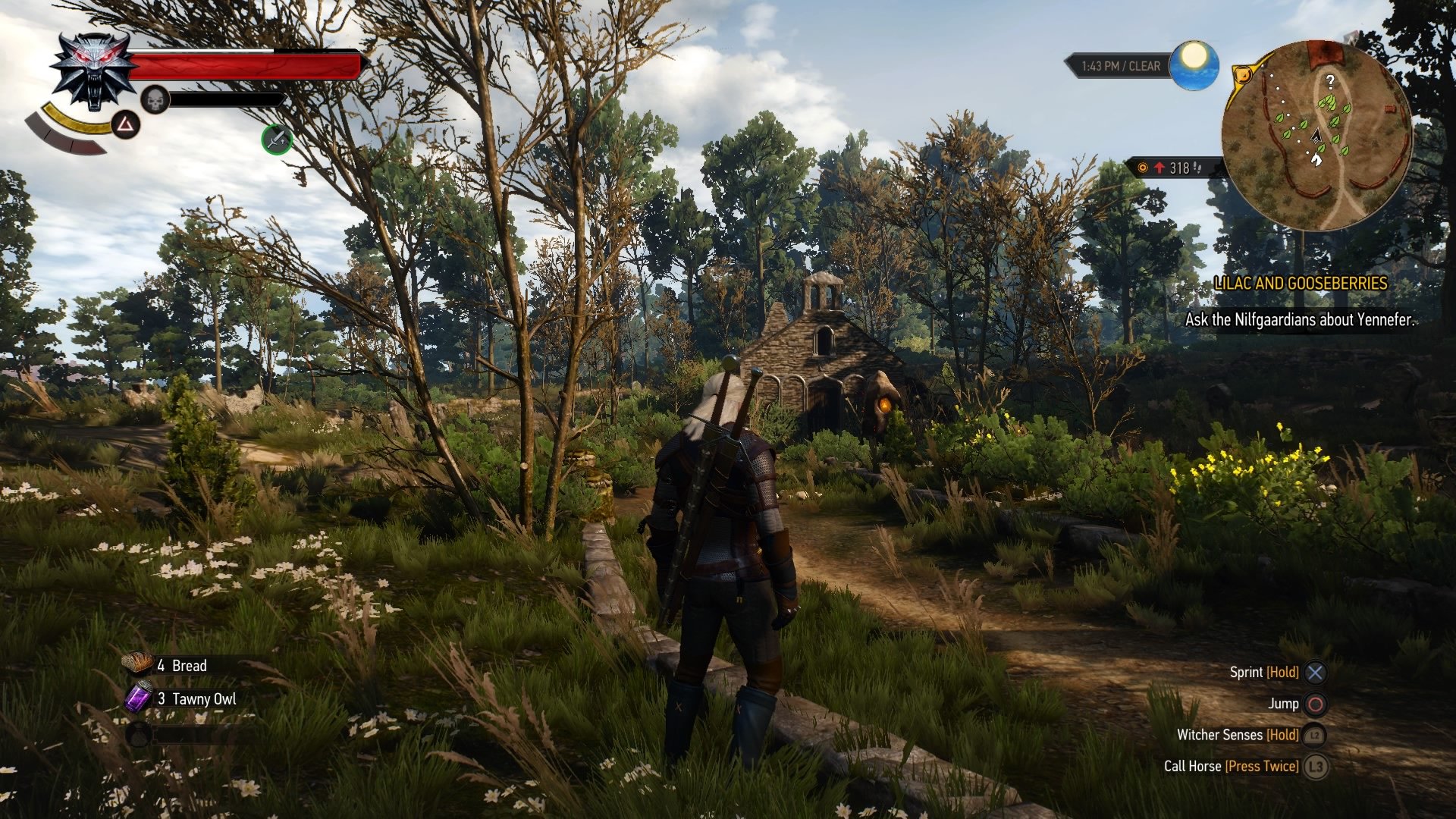 Being a part of the legendary Viper School Gear, the Viper silver sword grants a +20% bonus experience from slaying monsters which makes this weapon ideal for newbies who want to level up faster. Similar to other Witcher Gears - which are, in my opinon, the most durable and efficient armour/weapon builds in the game - having the entire set equipped would grant players a boost in poison and Aard damags, so make sure to look out for these diagrams if you're going for this specific build!

The Viper silver sword can be found at the basement of the White Orchard Cemetery, and is ideally accessed after defeating the wraiths pass the Place of Power. The crafting requirements are as follows: 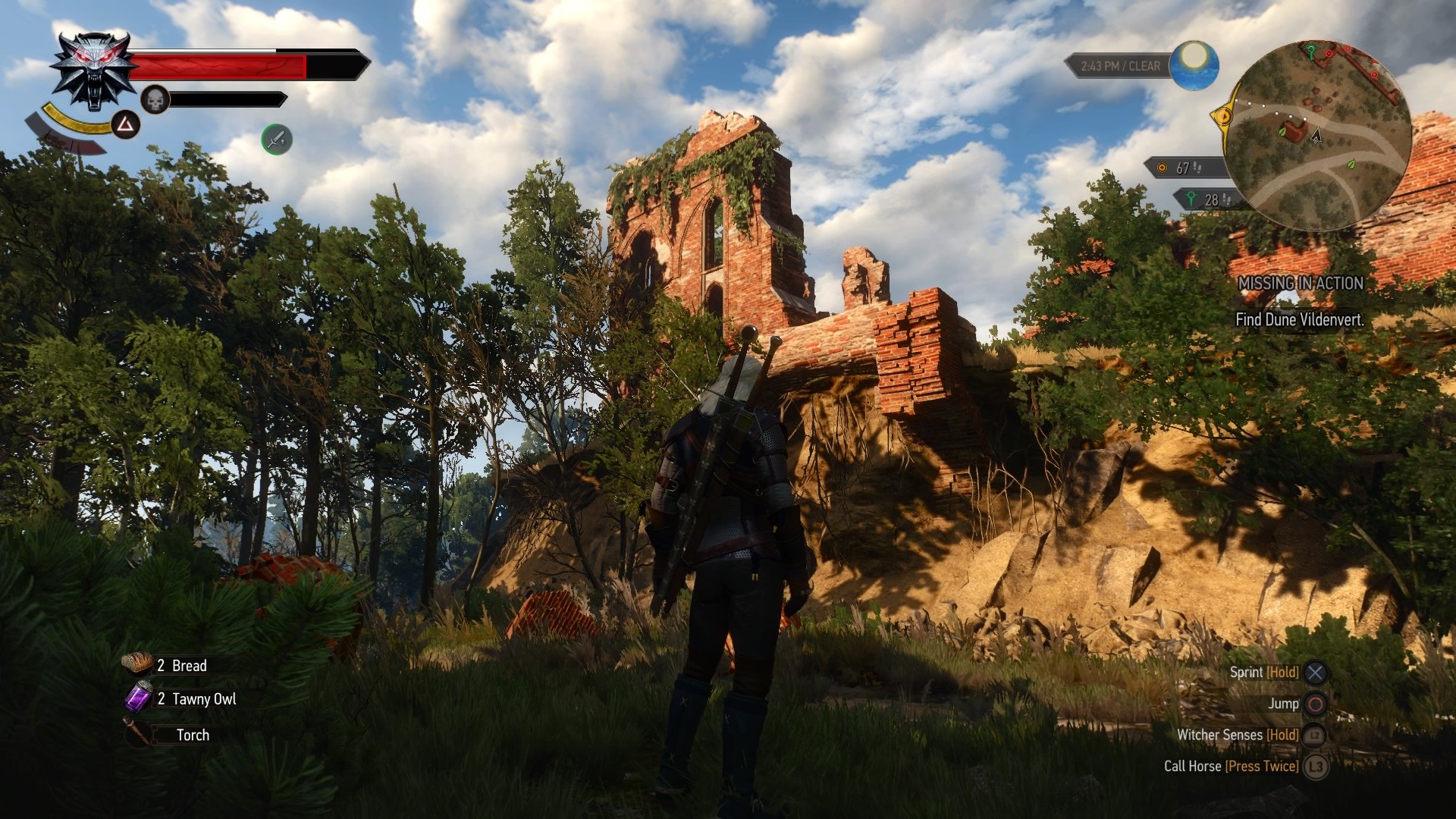 The Viper steel sword essentially boosts bonus experience gathered from human and nonhuman enemies to 5% and a +15% chance to poison, just like the other Viper gears. Unlike its counterpart silver sword, this blade is pretty hard to obtain especially at a low level. Making your way around the Ransacked Village, Geralt must head to the elevated area through the red bridge located at the western portion of the area, where he then has to fight a pack of bandit archers and mercenaries.

Ah, the good ol' Novigrad Longsword. After exploring White Orchard and the swampy lands of Velen, it seems like I almost always cross path with this blade in every loot boxes and armoury I encounter. The base Novigrad Longsword has no special attributes but its commonness makes it quite reliable and handy to new players who haven't explored much or doesn't have enough items to craft their own. The sword comes in four different types: crafted, common, magic, and master. The weapon scales with Geralt's current level so it can prove useful whichever part of the game you are currently in. 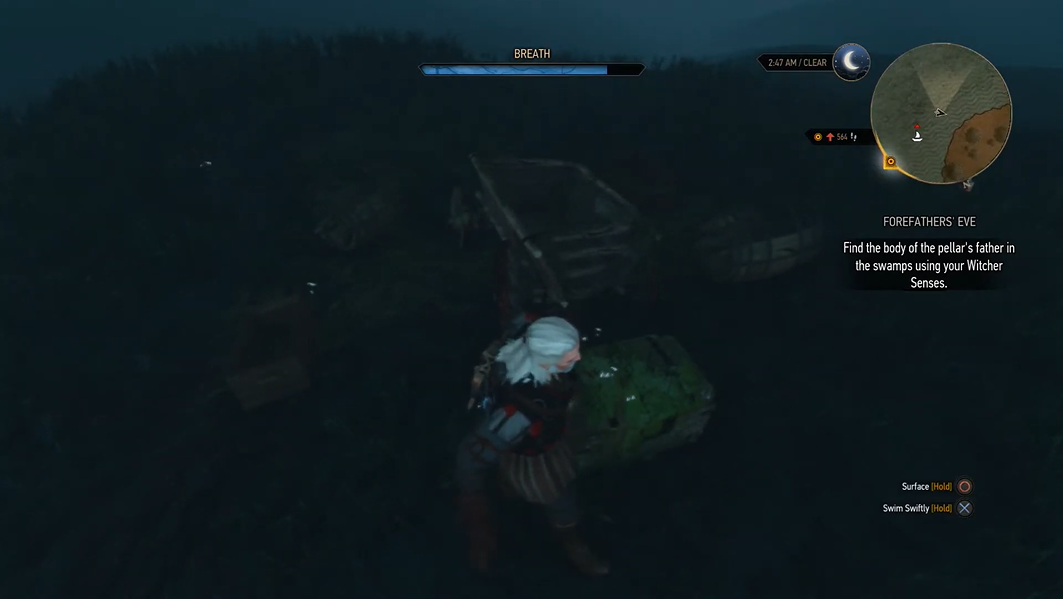 Quite possibly one of the first Relic Item that you're going to encounter, the Tir Tochair's chance of a bleeding on every hit is a 35%, on top of its +50% critical hit damage bonus and +5% critical hit chance. This steel weapon is perfect for anyone who wants to get straight up bloody and cause gradual overtime damages on their human opponents. The Tir Tochair's location may vary but it is a very rare find, commonly northeast of Hindhold where you make a short dive. Thankfully, a diagram can be purchasable but you have to progress a lot farther with the story in order to buy it.

The crafting requirement are as follows: 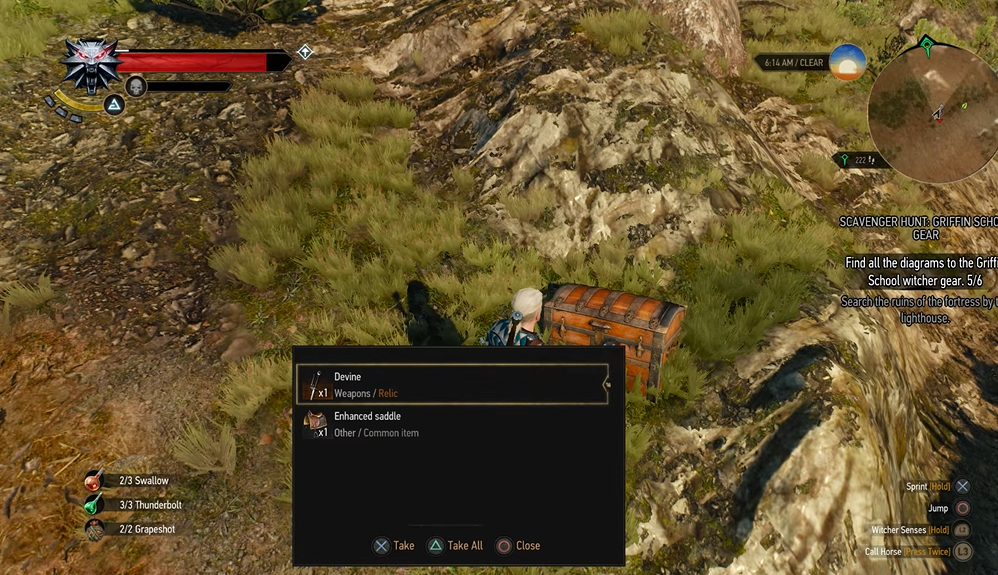 Devine, a reward you get after accomplishing the contract 'Strange Beast', is another Relic Sword that deals a maximum +50% chance armour piercing, +10% Aard sign intensity, +7% chance to stun, and +1-3% bonus experience from humans and nonhumans. A rough and jagged edged blade, this relic item focuses on a heavy build but also benefits with ranged attacks from signs. The item can't be crafted, upgraded, and is one of a kind which makes it an essential stock for those who want to cheese their way through a pack of bandits. 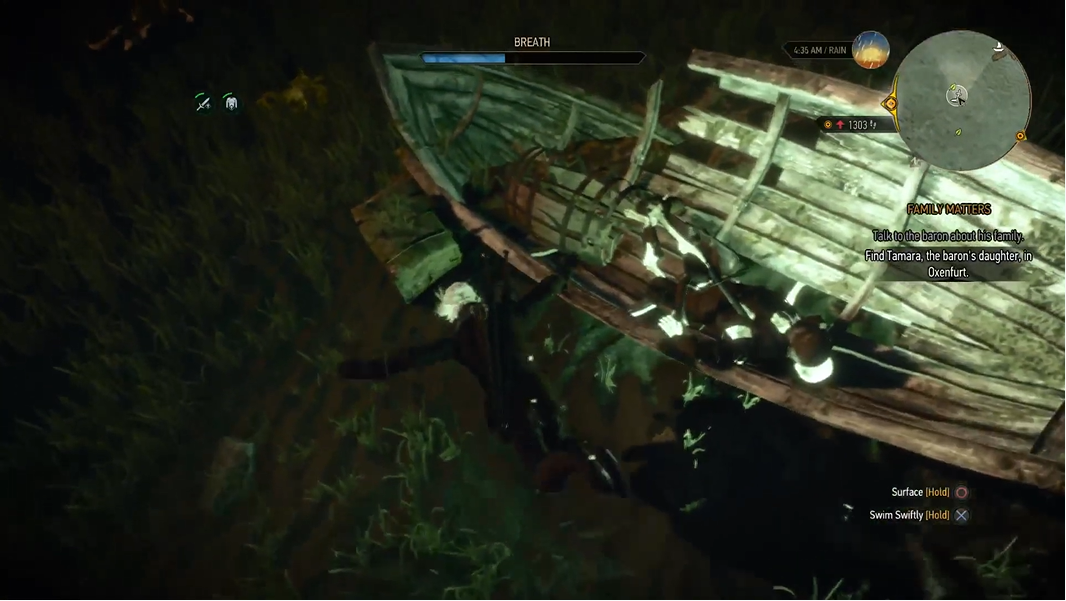 The Moonblade can be found in the Pontar River at the Spoils of War icon Southwest of Mulbrydale and Northeast of Crow's Perch. Along with Viper Silver Sword, this blade is one of the first few 'overpowered' starter swords. With it's +4% Yrden sign intensity, it can be quite useful against wraiths and other phantoms. Add to that, its +13% critical hit damage bonus, +4% critical hit chance, and +1% chance to freeze delivers an additional damage for final blows. The blade has a 20 damage difference from the Viper sword but its perks and effects surely does evens it out. 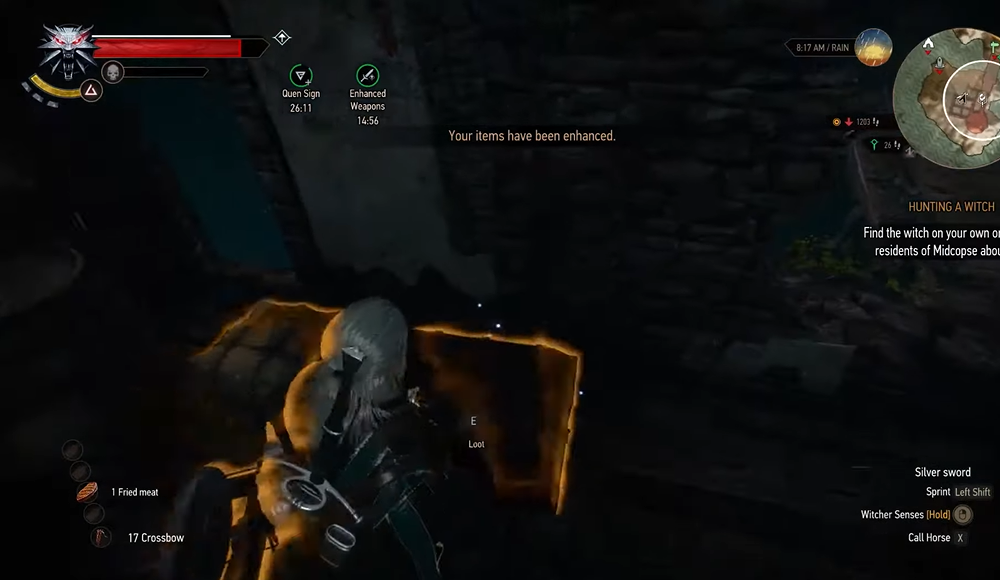 Yet another item from a collection of Witcher gear, the Griffin Silver Sword can be located in the abandoned lighthouse of Lornruk, located on the far Northwestern tip of Velen. The drawbridge to the tiny island has been raised, and a level 14 Wyvern guards the lighthouse. The silver sword has +5% sign intensity and +20% bonus from monsters, and may also be upgraded to a Grandmaster like the other Witcher gears. The level requirement for this sword is Lvl. 11 which is surprisingly quite low for a weapon of this calibre. 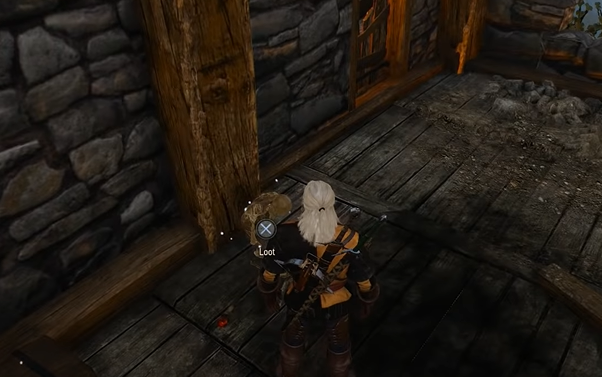 The diagram for the Griffin Steel Sword is found in the abandoned watchtower of Hindhold, located just to the East of the Novigrad Border Post, sitting on the edge of the Pontar river. The sword has+5% Sign intensity and+5% Bonus experience from humans and nonhumans effects. The sword may be upgraded to griffin steel sword - enhanced at a latter part of the game. The Griffin Witcher Gear set in general is balanced between swords and sign build, and personally this is what I used on my first playthrough.

Every witcher carries two sword, one for the monsters and the other for the mortals. It is only right for him to keep it at its best power and condition. Customizing and playing around with various builds will help you find the one you're most comfortable with bringing in a fight with a pack of bloodthristy ghouls or perhaps a ragtag team of criminals. Happy hunting!