I wanted to try out something a bit different - a totem build. I decided not to use incarnate and to maximise totem use. This resulted in more of a role playing build rather than maximum DPS. I would say the totem build is a decent success, however, it shines only when there are other party members as you are not able to deal huge amounts of damage and will mostly concentrate on positioning, buffing and adding statuses 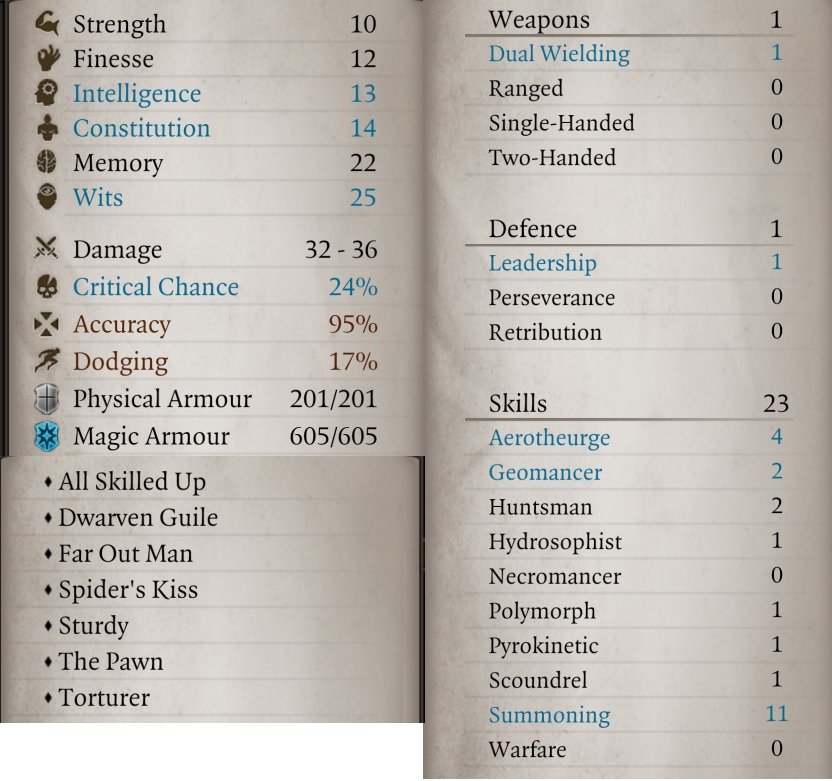 Your main attributes in which to invest are Memory, Wits and Constitution. The order is the priority. The reason for this is that your aim is to start the fight as soon as possible and survive in the heat of battle. Of course you will need equipment but you should invest only in points which allow you to wear better equipment which increases summoning skill. So it can either be strength, intelligence or finesse.

Tip: I would suggest going for Lucky Charm equipment also. As this builds priority is not dealing damage you can spare some of the slots for increased loot

The talents will be sorted by priority:

Your main skill is Summoning, however, you will play a major support role due this, I would suggest invest sparingly at summoning at the start (2 points should be enough). First you should invest 1-2 points to these abilities: Scoundrel, Aerotheruge, Pyrokinetic, Hydrosophist, Polymorph and Geomancer. After this you can continue investing more to Summoning. The skills which I recommend using will be explained below.

As I mentioned this build does not deal heavy damage, but if you prefer some role-playing and an interesting approach, this can spice things up. I personally have used dwarf, but an Elf probably works the best due to "Flesh Sacrifice" skill.

Moreover, this build greatly works with Lucky Charm as it is not too dependent on items which increase your damage heavily.