This post covers the best Liara build in Mass Effect 3 and Mass Effect 3 Legendary Edition. She is back again on the third entry to the game and now can join Shepard in almost all of the missions.

She is a very strong biotics user who can set up and detonate her own combos. Moreover, she has one of the lowest cooldown rates of all the companions.

This build will concentrate on using Singularity to always have a combo ready for Shepard or a companion to be detonated.

Of course, not only that but she will be able to disable enemies with Stasis and detonate combos if needed by herself thanks to Warp. 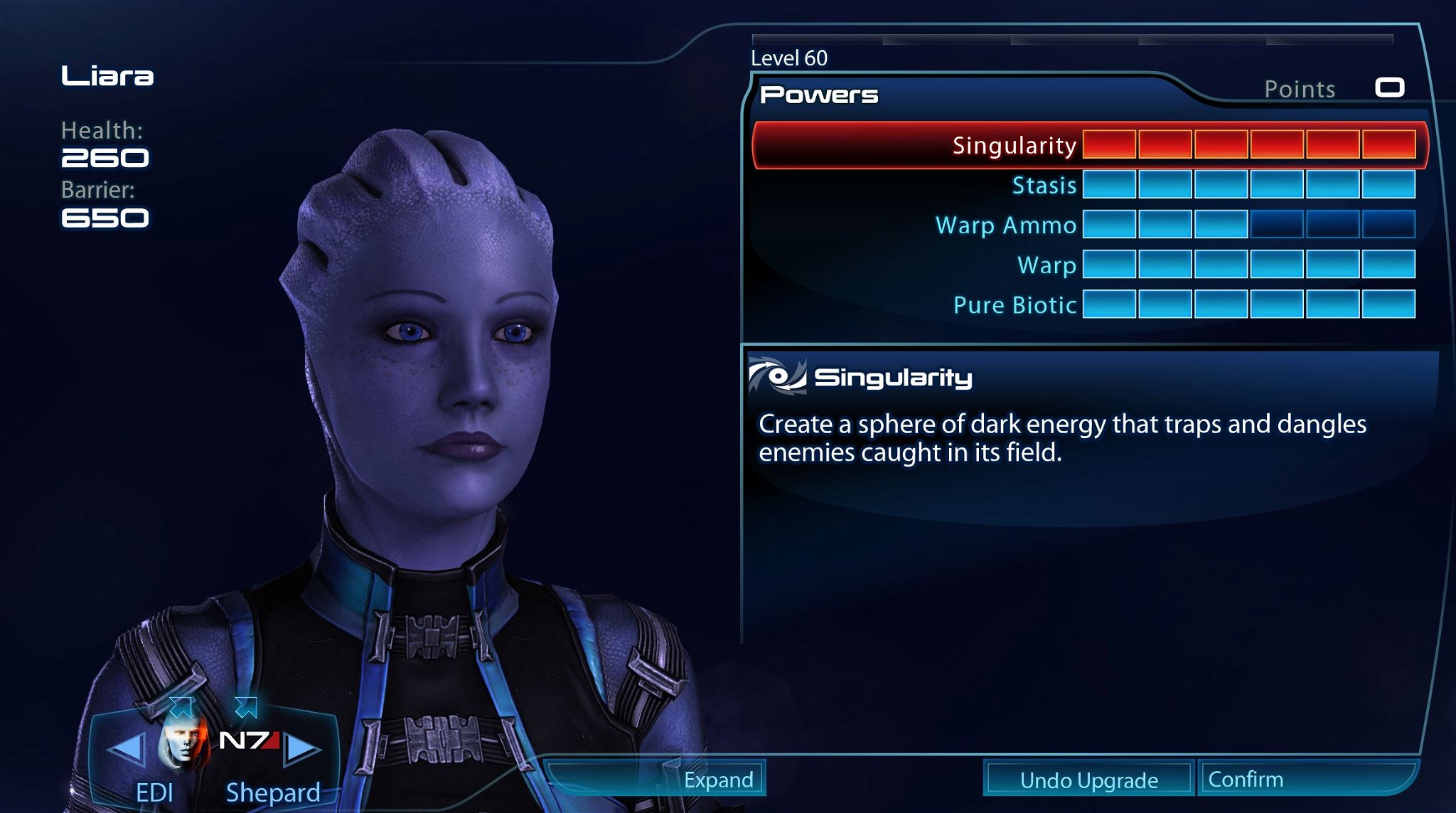 As you can see I take all upgrades that increase the recharge rate. The idea here is that you want to have Liara ready for any situation that is thrown at you:

This section covers detailed ability progression for Liara Build. This is just a suggested progression, feel free to adjust it based on your needs.

Use Liara to set up Combos

I think Lara's main role is to set up Biotic Combos. Singularity is an extremely good ability that has a very low cooldown. It can also stagger protected enemies. Once their protection is down they are lifted and vulnerable to detonator ability. If you or another companion cannot detonate it, Liara can do this by herself using Warp ability.

Liara can also use Stasis. Although at first glance it only paralyzes enemies it is able to prime biotic combos. So follow up with Warp or Throw and you will detonate a biotic explosion.

Liara is probably the most fragile companion out of all. Due to this, I suggest always placing her position manually in the back. This way she will not be taken out easily. To do that you can use manual commands, just place her behind cover that is further from the combat area.

This one is not mandatory but I still recommend trying it out. When Liara uses Stasis she freezes enemies in place. This makes it very easy to do headshots for maximum damage. Have in mind Stasis does not work on all enemies so you may need to change weapons mid-combat.

This Liara build allows her to have an extremely high cooldown rate. Singularity is an even bigger exception as we decrease it two times.

With this in mind, she is capable to release biotic abilities at a similar speed as Shepard. Be sure to utilize this as you can constantly interrupt enemies or lift them with her biotic abilities.

What makes Liara unique is that she can be used in almost any group combination. She can play both support and standalone role, due to her low cooldown rate and ability to make her own Biotic Explosions.

However, if you plan on maximizing group effectiveness here is what I recommend:

This section will cover what equipment you should be using with Liara Build. Generally what weapon you pick will not change much. Liara mainly relies on her abilities to either damage or support the group.

It is also important to understand that companions have no weight effect as Shepard does. So you should go for the most powerful and highest fire rate weapons with Liara.

These weapons are very good, as they can have a Power Magnifier upgrade. It increases Biotic power damage, for example, Warp.

In mass Effect 3 different companion armors provide some different stat boosts. So it is a good idea to see what you pick. Here is what I recommend for Liara build:

Thank you for reading this post on the best Liara build in Mass Effect 3. I covered recommended abilities and their progression, best equipment, and tactics.