In this post, I will go through Dragon Age Inquisition Knight Enchanter builds. It is one of the most exciting classes that the game can offer. It can be both a mage, a tank, a melee DPS, or support. Your call.

With the abilities and equipment listed below, you will be able to create overpowered Knight Enchanters, able to take bosses or groups of enemies alone.

I can definitely compare this class to the Arcane Warrior builds from Dragon Age Origins. Moreover, these builds easily work on Nightmare.

Just as you reach Haven, you will need to respecialize skills. Reason being, that some of your spells are subpar and they can be put into better ones.

If you have any skill points left choose the ones that fit your playstyle the most.

At levels 10-12 you should reach New Haven. Once there, do a Specialization quest to obtain Knight-Enchanter class. Respecialize skills again. Now you are ready to fully commit to Knight Enchanter.

This build variation for Knight Enchanter concentrates on having many elemental spells and keeping a distance from the enemy.

Of course, due to Fade Shield, you can soak a decent amount of damage and fight enemies up close. but we mainly use the barrier to pump up Knight Enchanter's spell damage.

Once you get Knight Enchanter specialization remember to respecialize skills. The abilities are listed in order how they should be taken. So once you level have a free skill point invest into the next ability.

Once you have these spells under your belt there are a few options to prioritize.

A similar approach to the previous option. However, now you will increase the size of the barrier to increase spell damage with Chaotic Focus.

In the end, you should be able to get most of these abilities by the end of the game. However, it is up to you to decide what type of playstyle you want to emphasize.

Here are the abilities that I had at level 21. The detailed version can be found in the next section.

The idea is to have at least one ice spell in this tree against enemies weak to cold.

The last abilities of the tree provide great synergy with barrier, that you will constantly have on you. 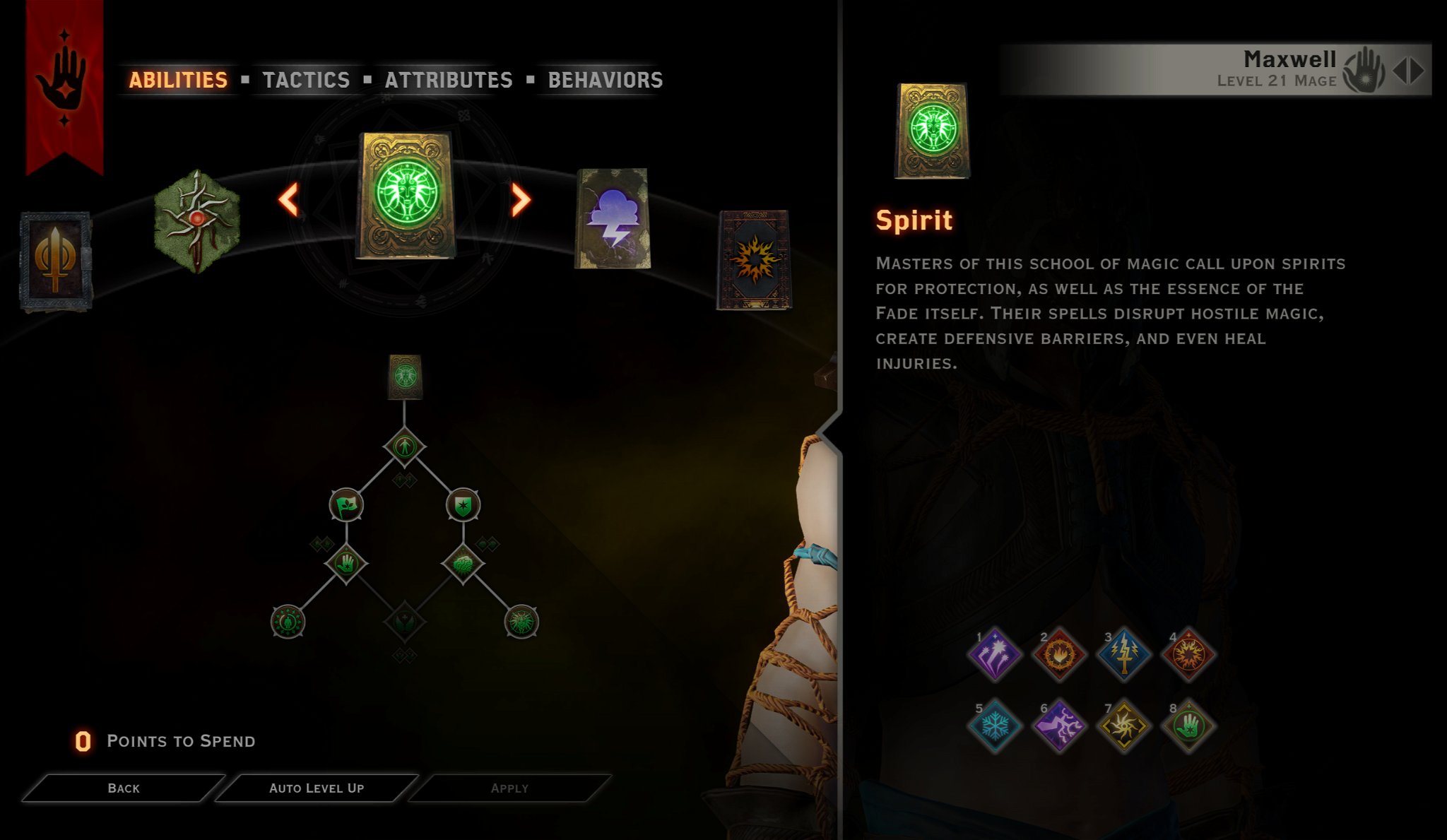 The crux of the build is Energy Barrage. Any other abilities that you take for this build are complementary. 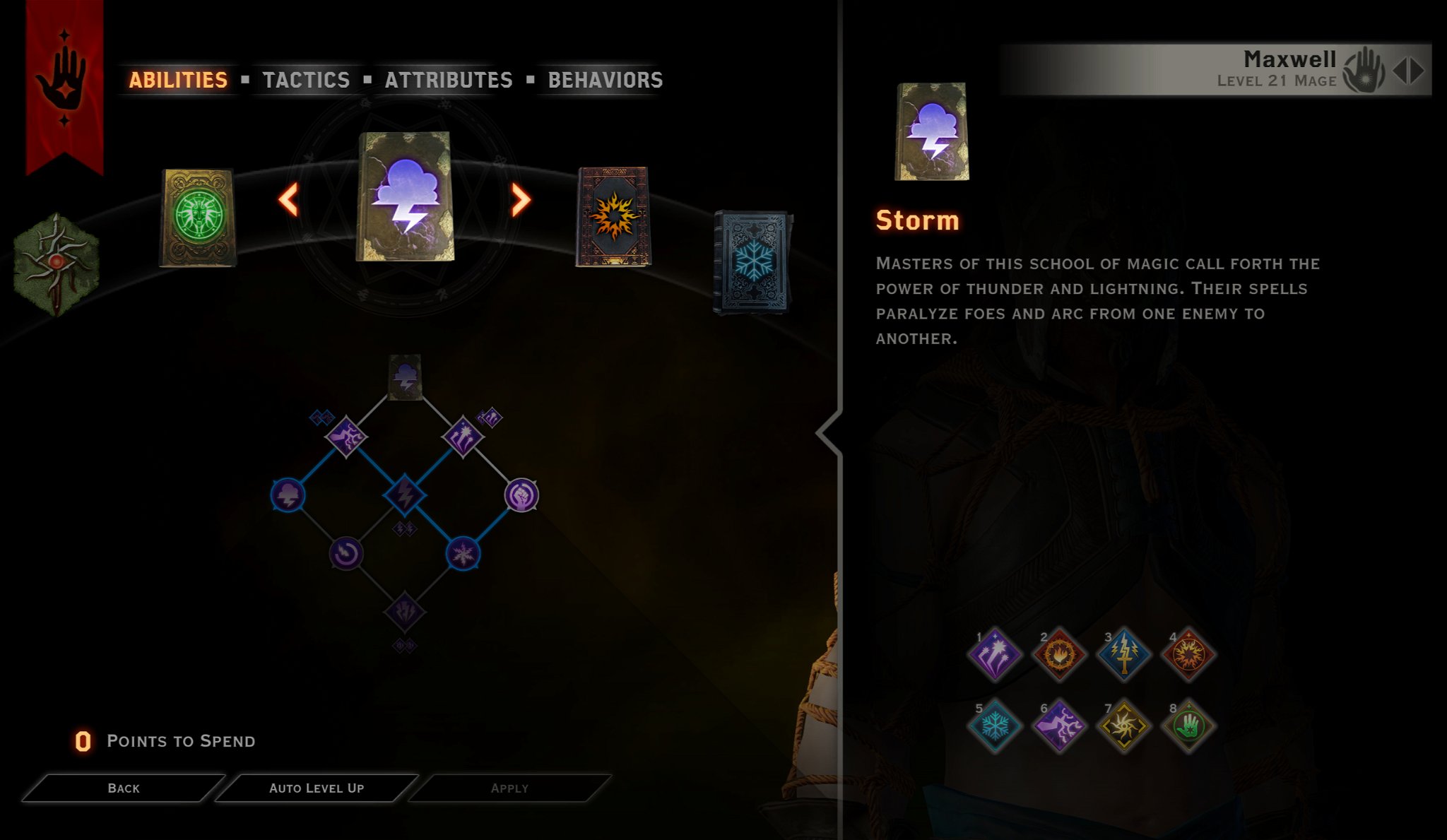 Provides one of the strongest abilities in the game: Fire Mine 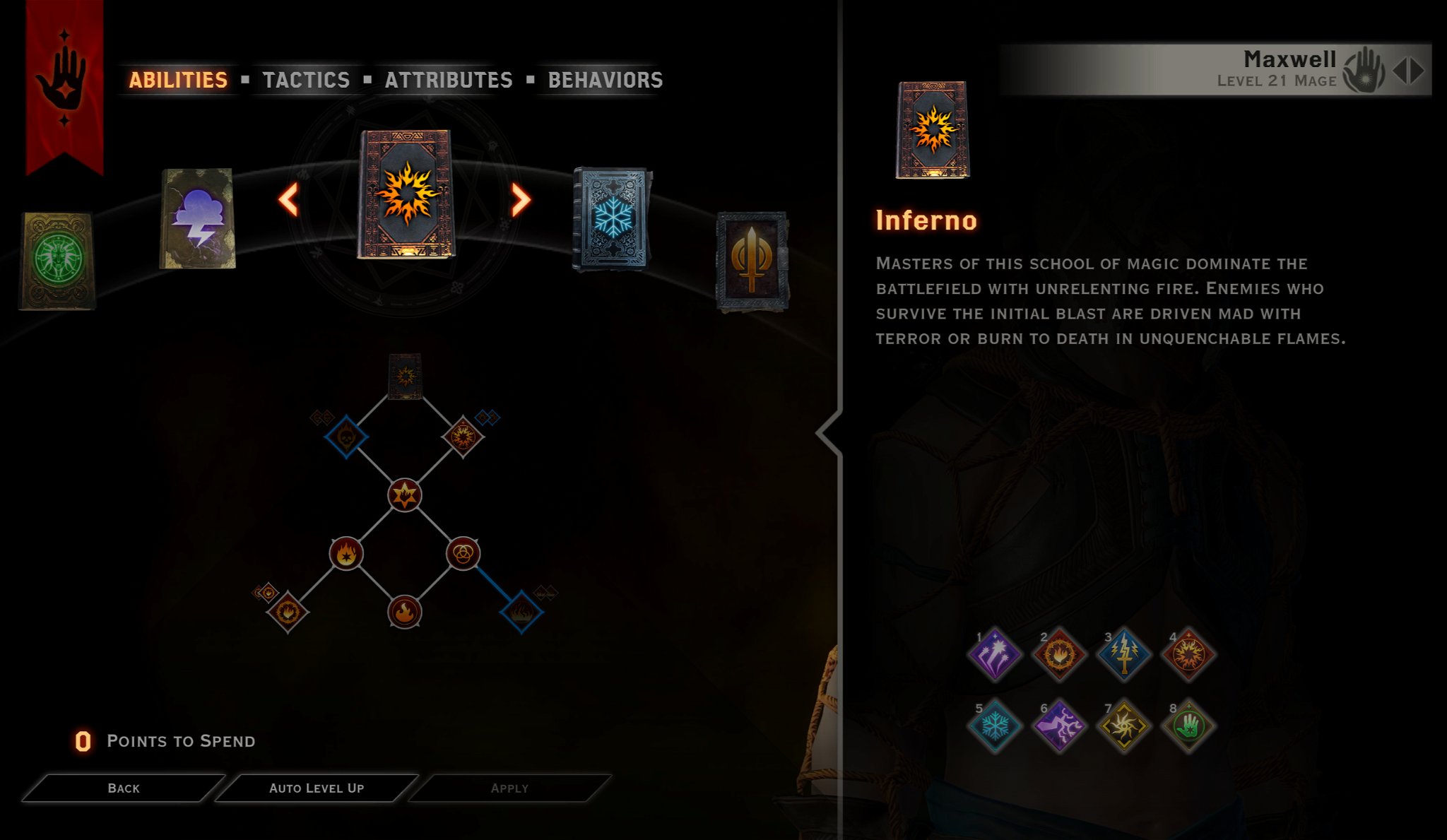 Knight-Protector passive ability will allow you to constantly generate barriers and maximize your damage with Chaotic Focus. 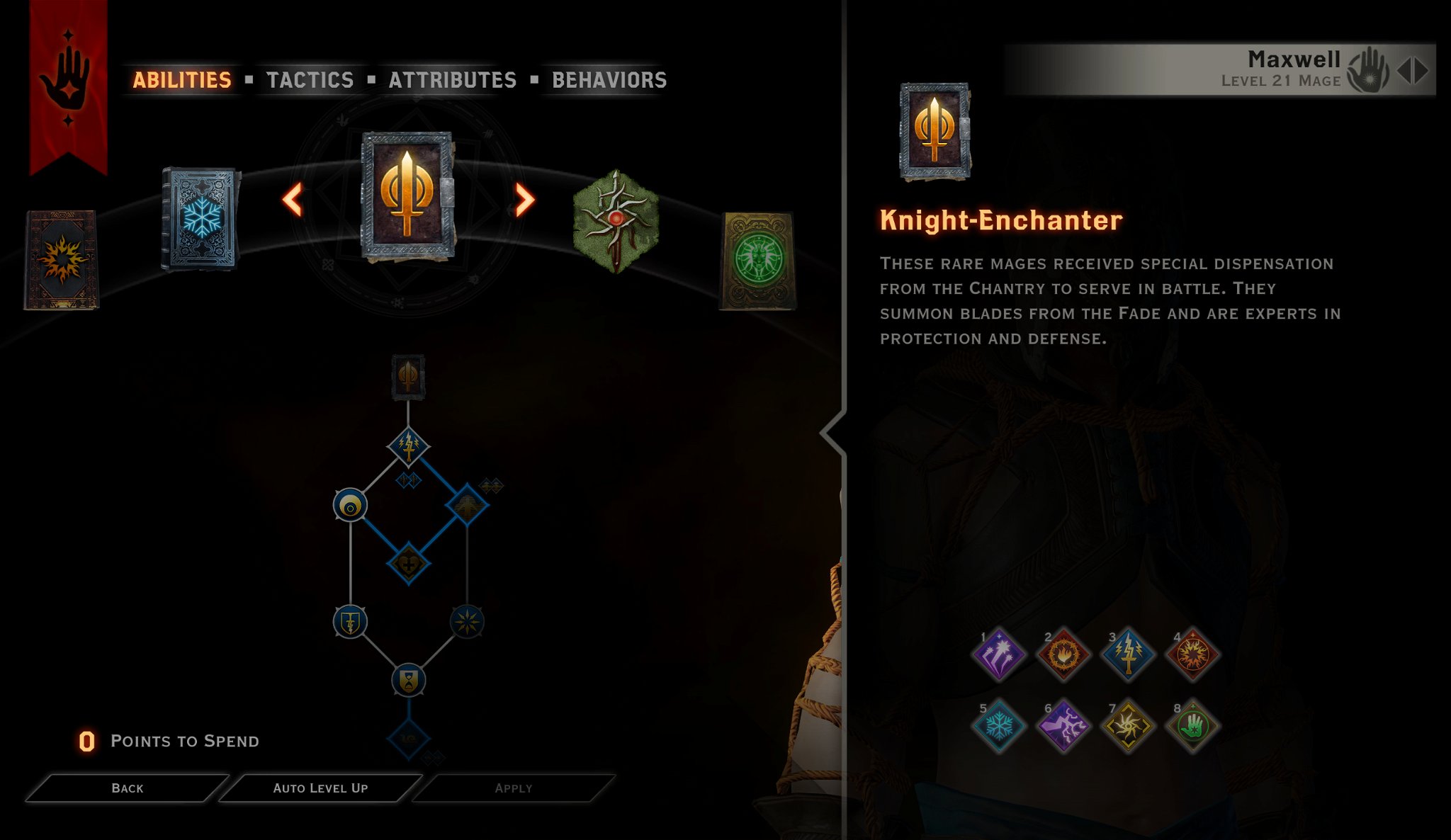 These are the stats that I recommend prioritize:

This section covers recommended gear that you should use.

Note: some of the items are not the "best". However, their better versions are only available in Trespasser DLC, which is close to the ending of the game. Due to this, they will be useful for a few hours at maximum

I list the gear in obtainable and craftable sections. This way the player can decide the best option available at hand. Generally, crafted items can allow you to maximize the build and in most cases are better.

This section covers a list of schematics to craft armors

Try to find and obtain amulets that have higher priority. They are better for this build

Try to find and obtain belts that have higher priority. They are better for this build

Try to find and obtain rings that have higher priority. They are better for this build

Here are the tactics which I use:

I also change staves based on the enemies which I fight. So if enemies are weak to Fire take out Fire staff, so that Energy Barrage would to Fire damage. I really recommend having a few of these items

I think this build is the one that made Knight Enchanters especially powerful. The staple weapon of it is Blade of Tidarion. It has a special mechanic allowing you to double the amount of Energy Barrage projectiles.

However, this is just part of its charm. You can spam Spirit Blade and constantly regenerate the barrier.

Still, that is not all. You will have Fire Mine Array to triple your AOE damage near you.

... and you will have Ring of Doubt to double your initial damage, due to critical hits

So let's get into this build as it is probably the most exciting one and can be compared to Arcane Warrior builds from Dragon Age Origins.

Beyond this point, any other abilities are just icing on the cake. To be honest you are now an unstoppable melee mage with a Two-Handed sword. It does not get any cooler than this. 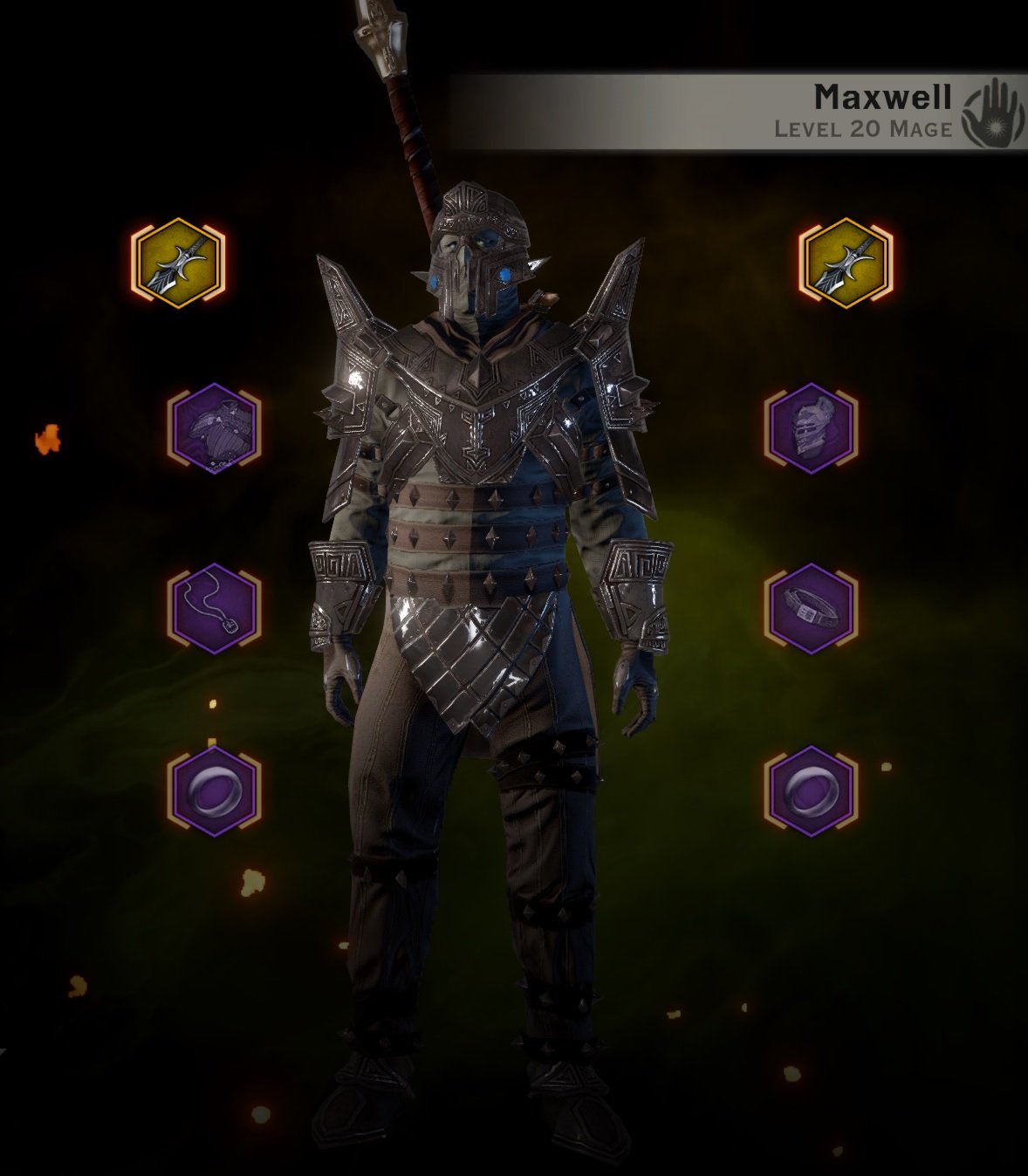 This section is extremely important. The pillar of this build is having crafted Blade of Tidarion. Not only that but you need to put an elemental rune (the best one that you can get). This rune's element should differ from the weapons element.

Why do all this?

Blade of Tidarion is a special weapon when you use it with Energy Barrage. This spell will activate two times when you have a different element rune. So in total, you will release 24 projectiles - 12 with base element and 12 with Rune element.

This all results in instant barrier regeneration. Due to this, you can easily tank many of the game enemies.

Before accessing the Blade of Tidarion, feel free to use any of the decent staves that you find.

These are important abilities that you can use special materials to greatly improve equipment. Look for a Masterwork slot in the items when crafting.

This section covers a list of schematics to craft armors

Try to find and obtain amulets that have higher priority. They are better for this build

Try to find and obtain belts that have higher priority. They are better for this build

Try to find and obtain rings that have higher priority. They are better for this build

Please check the top video for a showcase on how the build can be used, the main idea is to use Energy Barrage + Spirit Blade + Fade Step. All the other abilities are complementary

Thank you for reading this detailed build guide on Dragon Age Inquisition Knight Enchanter builds. I definitely recommend trying out this class as it is extremely enjoyable.

or Intense Elfsnake Vitaar (do not have wiki for it)

Thank you for helping an old woman to enjoy the game even more, now with understanding.

A pleasure to hear this! Feel free to ask any questions :)

Hi, am I missing something about energy barrage? You mention it generates 24, which is double to 48. In game it says it creates 12 projectiles. That means in total you get 24 with Blade of Tidarion right?

Hey, sorry, my mistake. Energy Barrage releases 12. Then if you add an elemental rune to Blade of Tidarion (different element than the blades) it will release additional 12 projectiles. So in total it is 24 :)

Ah okay, I thought I was doing it wrong. Thanks!

Can I ask which companion do you usually pick? I know that build can be solo. But I'm still on process to have those equipment, so I still need companions. In that case, who is the most efficient one?

I generally recommend having one of each class. One mage, warrior and rogue so you could open any doors, chests, etc.

But my most favorite companions are: Varric, Solas and Blackwall.

Thankyou brother... Your guides are so helpful.