This post covers the best Engineer build in Mass Effect 3 and Mass Effect 3 Legendary Edition. They rely on Tech powers to create various elemental effects. Moreover, they are able to command mechanical contraptions like drones that help in the battlefield.

The build concentrates on using Tech abilities - blowing enemy weapons, incapacitating with electricity, and setting on fire. What also makes it special is that if you encounter synthetic enemies like geth, you can easily take control of them and turn enemies into allies.

But there may come a situation where Engineer becomes overwhelmed - allies die or there are just too many enemies... It can easily be overcome with drones at turrets at your disposal. They stun enemies, set them on fire, or are perfect for drawing attention. 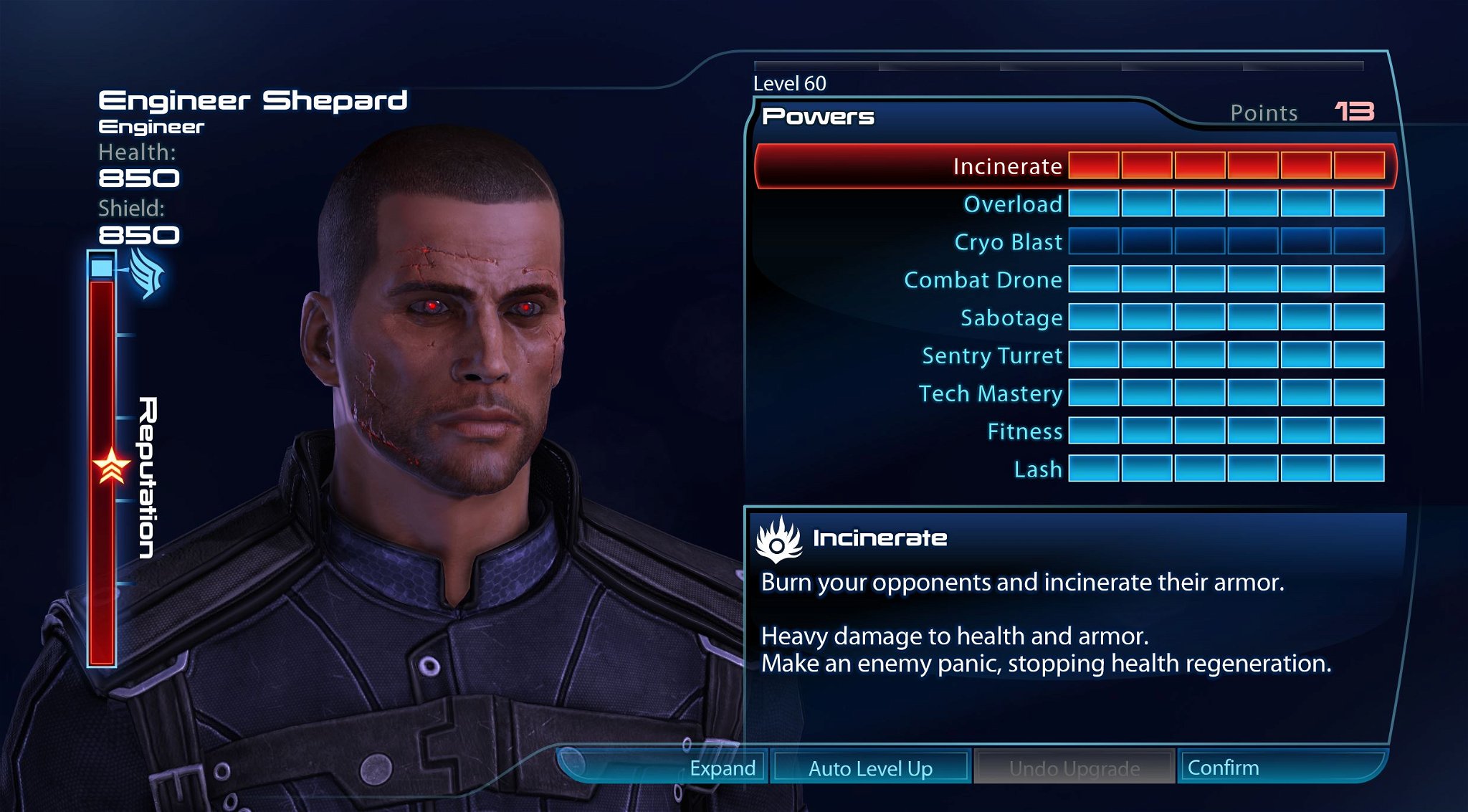 For bonus powers, there are some excellent choices for Engineer build. Be sure to read them as they significantly improve overall gameplay and weak points:

This section covers detailed ability progression for Engineer Build. This is just a suggested progression, feel free to adjust it based on your needs.

The core of the build is ready and should be able to use the main rotations and feel good using the build. Here are the next steps that you can take to further improve Engineer.

This section will cover how to best play Engineer build in Mass Effect 3.

Sabotage as a primer

The Sabotage skill works extremely well with the Engineer build. This comes true with the level 6 upgrade - Tech Vulnerability. After you use the ability on the enemy all tech skills will deal 100% more damage for 10 seconds.

So follow up with Incinerate and Overload after the Backfire effect (the organic enemy gets shocked and they stutter). This will cause a Tech Burst with double damage on top. In the example above enemy engineer, turret, and nearby assault Tropper gets annihilated, while on trooper gets AOE damage from the combo.

Of course, Sabotage can also take over Synthetic enemies. In this case, they are not primed for Tech Burst. But it is perfect in some encounters where you can take over Atlas or Geth Prime. They then help you to fight other enemies for a few seconds.

Having drones early in the game will allow them to draw the enemy's attention. This is perfect as you can coordinate your attacks and have some breather from constant bullets.

As you can the summon stuns enemies and then enemies start attacking it. This is especially useful in case your companions die and you are being overrun from multiple sides.

The turret is also very useful once you get the Flamethrower effect. Its attacks then prime enemies for Fire Explosions. Follow up with Incinerate or Overload to cause an explosion. Unfortunately, it is not as good at drawing enemy attention.

Engineer class - is a caster

The first question would be what that means. Similar to adepts, the engineer is best suited for constantly using Tech abilities rather than concentrating on using the gun. The main reason is that they do not get any bonuses for any of the weapon types. You can still use weapons but they are not as effective as with some other classes like Soldier

Here are the companions that I recommend for Engineer in Mass Effect 3:

This section will cover what equipment you should be using with Engineer Build.

I do not think assault rifles are necessary for this build but here are some options in case you prefer shooting.

These weapons can come in handy once you use Sabotage on the organic enemy. The backfire effect will stun them, allowing you to have a few seconds to land the precise shot.

Here are the stats that I recommend prioritizing for the Engineer build in Mass Effect 3:

If you wish to use separate armor parts here are the options:

As you can see we go all in on power usage to decrease power cooldowns and get the largest power bonuses. This will affect all tech skills.

Thank you for reading this post on the best Engineer build in Mass Effect 3. I covered recommended abilities and their progression, best equipment, and tactics.