This post is about Dorian Pavus. I will explain how to best build him in Dragon Age Inquisition

Dorian is a Tevinter mage that will join the Inquisitor on its journey. He has necromancer specialization which concentrates on dealing Damage over time, resurrecting himself, and taking over enemies.

Till level 10 we level Dorian as a simple mage. So there is nothing special with the skill selection or priority

With these skills, Dorian will be helpful against all enemy types in the early game. Once you reach level 11 you are free to start working on the next build

I will cover two variations of the build. The first one is a simpler one that results in less micromanaging.

The second one is Dorian that utilizes every spell to put Fear into the enemies. The problem with Fear is that AI stops attacking them. For this to work you will need to manually click on the enemy and select "Attack my target"

Unfortunately, we skip Spirit Mark. Even though it is a great ability it creates a layer of micromanaging. When you want to progress with the story or escape combat fast you either:

IMPORTANT: Get relevant Amulet of Power for Dorian to maximize the number of ability points

This build is a simple one as its main focus is so that Dorian could deal damage and also would need no micromanaging.

These skills constitute the base of the build. However, there are still some considerations if you will have more points left

Here is what Tactics I recommend for this build: 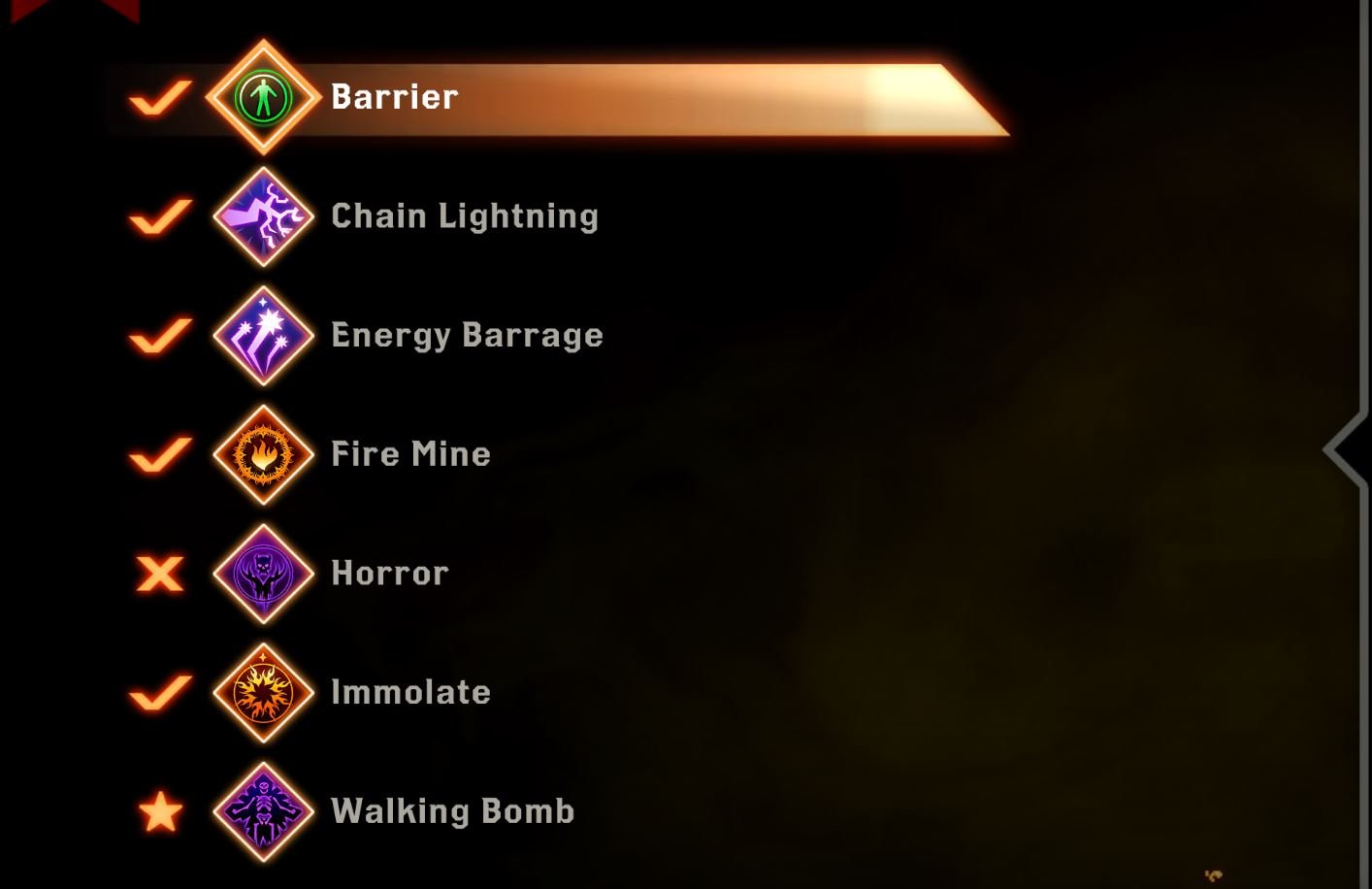 The idea is simple. We want Dorian to cast Walking Bomb as often as possible. For other spells, he should decide when is it best to use them.

Have in mind that Horror should be disabled as we do not want to ruin our party AI.

This type of build will concentrate on wreaking havoc on enemies by putting them in constant fear and using the Walking Bomb to create explosions.

These skills constitute the base of the build. However, there are still some considerations if you will have more points left

For this variation of Dorian here is my recommended Tactics: 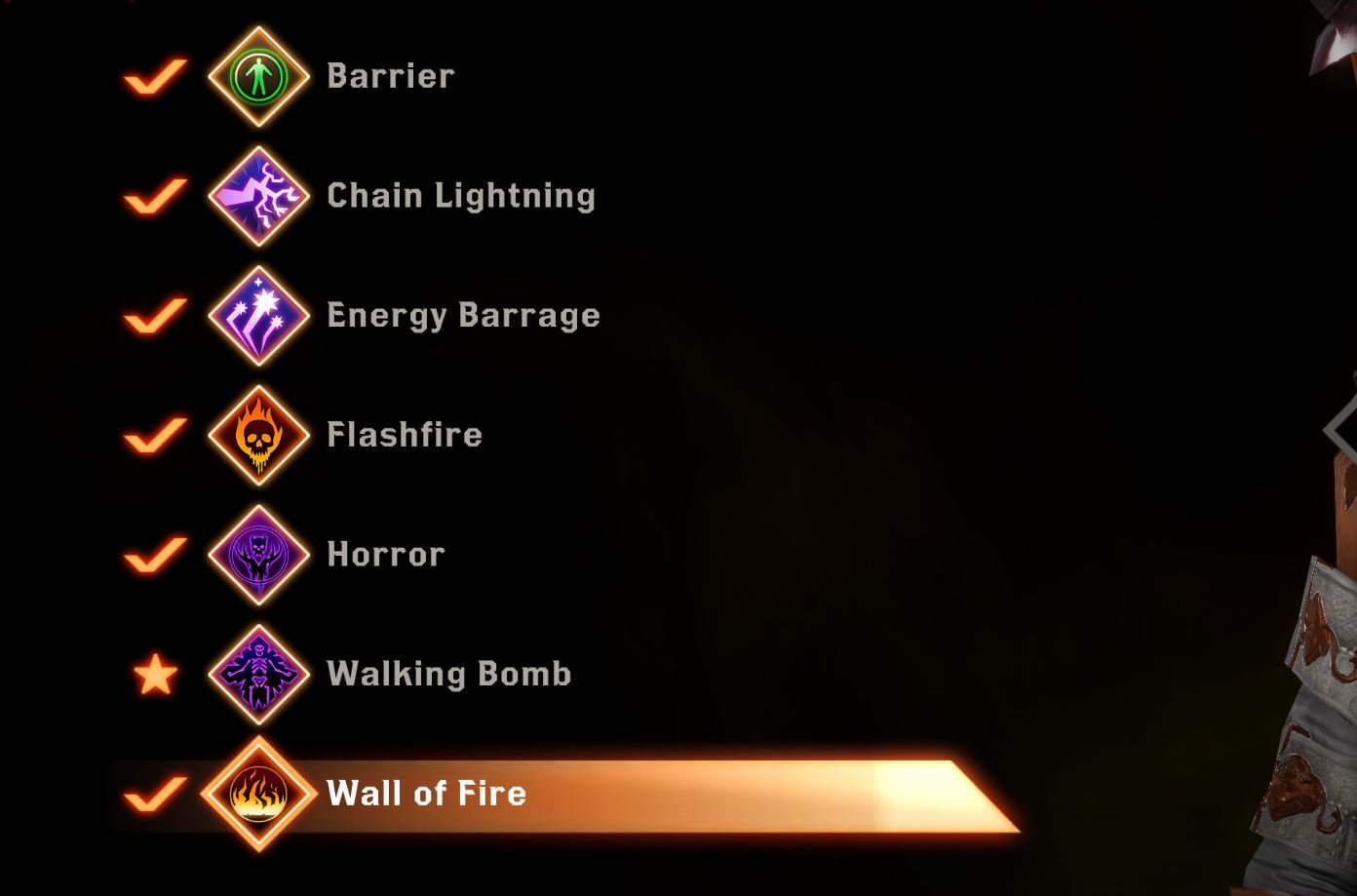 We leave everything to active. However, Walking Bomb should still be set to preferred.

While under the effects of Horror, your companions AI will not attack the enemies. To override this behavior you should target the enemy and click "Y" (on PC), to make them attack the enemy.

Doing it this way will make sure that while other enemies are on effects of Fear you can concentrate on the single one.

Of course, if you are setting Fear on a single enemy with Horror, be sure not to attack it.

Overall the stats are similar to other companions. Before level 13:

In this section, I will cover some recommended items and equipment for Dorian

These are important abilities that you can use special materials to greatly improve equipment. Look for a Masterwork slot in the items when crafting.

Generally, the ones with a boost to critical damage should be equipped when Dorian has a 50%+ critical chance

Generally, I prefer craftable staves if you have good masterwork and other materials

I think all of the armors listed below are extremely good, choose the one to your liking

Thank you for reading this post. I hope it will shed some light on how to best build Dorian in Dragon Age Inquisition

Feel free to leave feedback in the comments below

I think Kitty's Collar is the best Amulet for Dorian. Once he has fallen and trigger Simulacrum, he will have 10s to spam free spells. Then he will be revived by the effect of Kitty's Collar. It is really OP.

Nice! I added this as an option in the gear section

I can say this helped but some of the items to make the things you said i have no idea where to get them at. If you could include them that would be better, but its just my opinion :) have a good day!

Support Gamestegy
And get benefits: