In this post, I will go through in great detail how you should best build Cassandra for Dragon Age Inquisition. I will cover: which skills to pick, tactics and gear options.

Cassandra is the first companion in Dragon Age Inquisition. I think she is quite rejective of the Inquisitor at first. However, during the game, Cassandra opens up and it is interesting to hear her background.

Important! The companion builds are compatible with Nightmare difficulty, however, to pull it off correctly, be sure to have a good Inquisitor build

So let us go through the Cassandra Builds

I will assume that Cassandra will be your main tank at the beginning of the game. Even though Blackwall may be better, for some players it may take a while to get him. So we will first build Cassandra as a tank.

Once you reach level 11, specializations will unlock and you can start working on the full Cassandra build

This build mainly concentrates on supporting your party members and dealing damage. Unfortunately, it is mediocre for using Cassandra as a tank.

IMPORTANT: Get relevant Amulet of Power for Cassandra to maximize the number of ability points

In this section, I will go through all the skills and talents that need to be picked for this Cassandra Templar build in Dragon Age Inquisition.

With this, the core of the build is finished.

This section is a short version of what abilities you should take for Cassandra.

We want to have Horn of Valor, Deep Reserves, and Combat Roll from this tree.

The main aim is to get Wrath of Heaven ability. This is the build's signature ability.

In this section, I will cover the best stats that should be prioritized when choosing what equipment to equip. This will ensure that you build the best two-handed Cassandra

In this section, I will go through some decent equipment that you can equip or craft.

It is important to note, generally crafted equipment is better. However, for this you need good Tier 4 or Tier 3 materials.

Here is a list of great weapons that you can obtain at different levels for Cassandra. Check what you prefer the most, I have listed weapons that have both a high bonus to attack and also a bonus to critical chance or damage.

So for example in the late game if Cassandra has a high critical chance, give her two-handed weapons with a big boost to critical damage. If low, then give items with a large attack boost.

Schematics are usually better than obtainable counterparts. However, you need good materials for that.

Unfortunately, there are not many options for obtainable armors that provide offensive bonuses

Sadly there are not too many armors that you can craft to give a lot of offensive options. Your main priority is to either get Leather or Metal utility slots

The amulets are listed by Tier. Usually, the Best tier can be obtained late in the game, but it provides maximum bonuses.

In this section, I will go what strategy and tactics you should use to fully utilize Cassandra 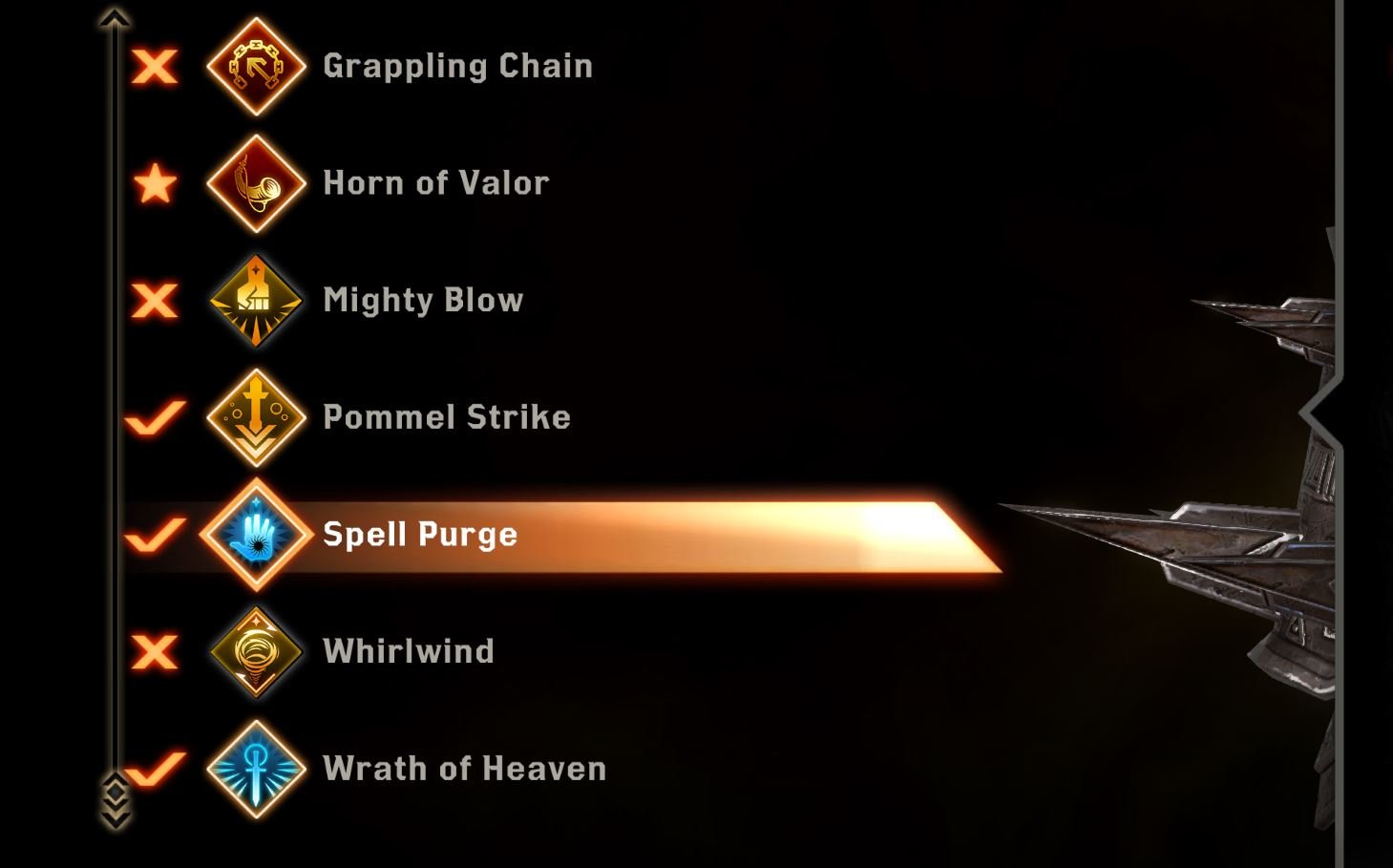 Overall this build should be self-sufficient and you should not micromanage Cassandra too often. however, if you see that she uses some abilities too often, when it is not necessary, feel free to either lower them to Active or Disable.

This build is for those that want to have Cassandra as their main tank in the group. Although she may be a bit weaker than Blackwall, she can definitely do the same job.

In this section, I will go through all the skills and talents that need to be picked for this Cassandra Tank build in Dragon Age Inquisition. Feel free to adjust your abilities based on preference. This is just a recommendation

IMPORTANT: Get relevant Amulet of Power for Cassandra to maximize the number of ability points

Important note: I personally recommend using a Two-Handed sword for a tank build. Even though you would think sword and shield is more "logical", the two-hander has better crowd control skills, and some of the talents from Weapon and Shield tree work without a shield equipped.

However, you are free to use Sword and Shield if you prefer, just do not invest anything into Two-Handed weapons and swap those skill points for Weapon and Shield tree abilities.

With these abilities, the core of the build is done, and you should have no problems finishing the game.

However, you can still get these skills if you have free skill points:

This section will shortly cover what abilities should be picked in what tree for Cassandra Tank build.

Our goal is to have Wrath of Heaven, to stun groups of enemies. 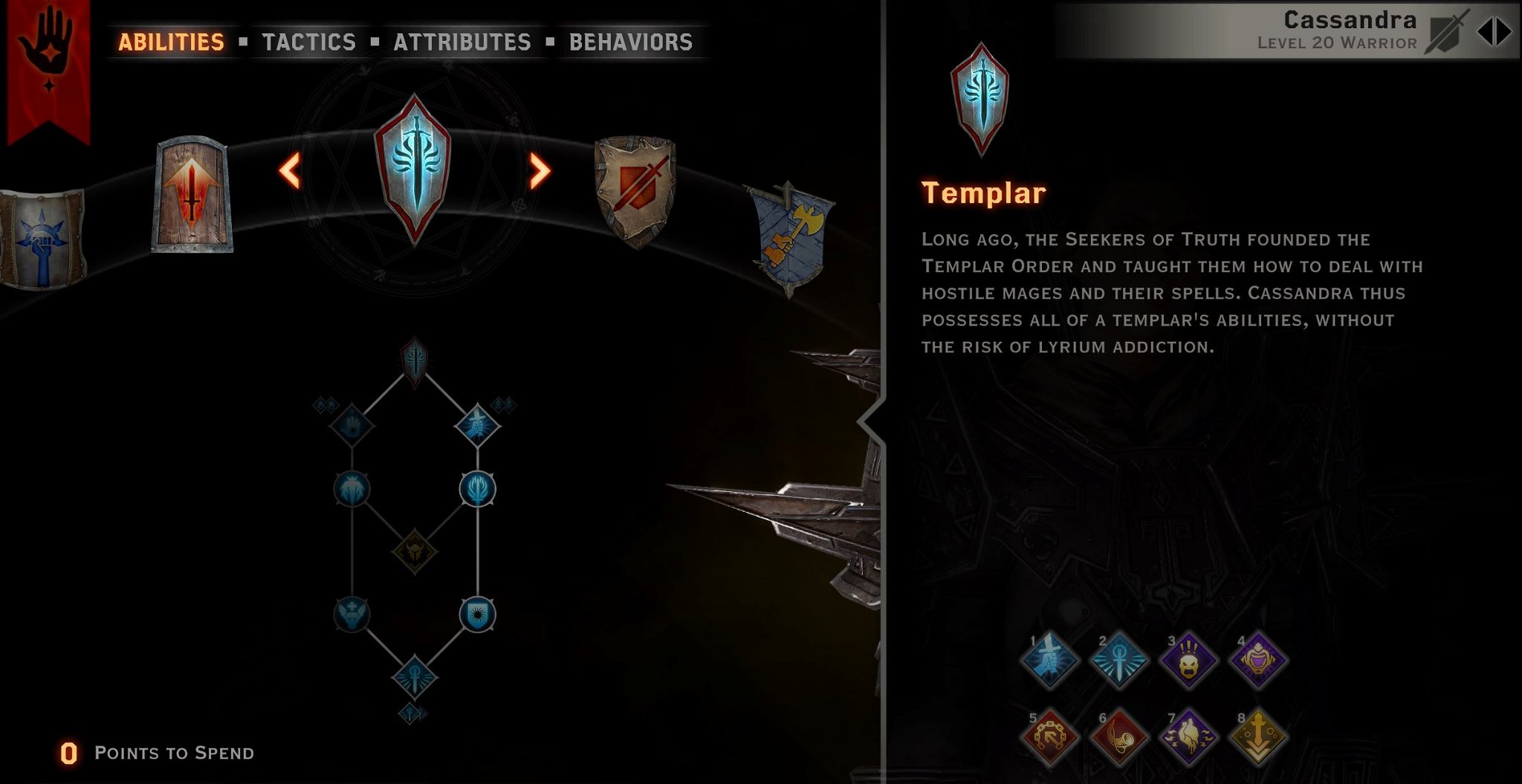 Getting Horn of Valor will ensure that Cassandra and party members constantly have Guard on themselves.

Getting Pommel Strike ensures that we have cheap offensive skill to knock out enemies.

Only get the passive ability to increase survivability of Cassandra

With these stats high enough Cassandra should have no problem taking groups of enemies on herself. Moreover, as long as she generates enough Guard she can keep aggro on bosses.

In this section, I will go through some decent equipment that you can equip or craft.

Schematics are usually better than obtainable counterparts. However, you need good materials for that.

The amulets are listed by Tier. Usually, the Best tier can be obtained late in the game, but it provides maximum bonuses.

If you see that Cassandra can handle enemies well: maintains guard, does not die or use potions, feel free to use rings from the offensive build

Here is what tactics I recommend to use with Cassandra: 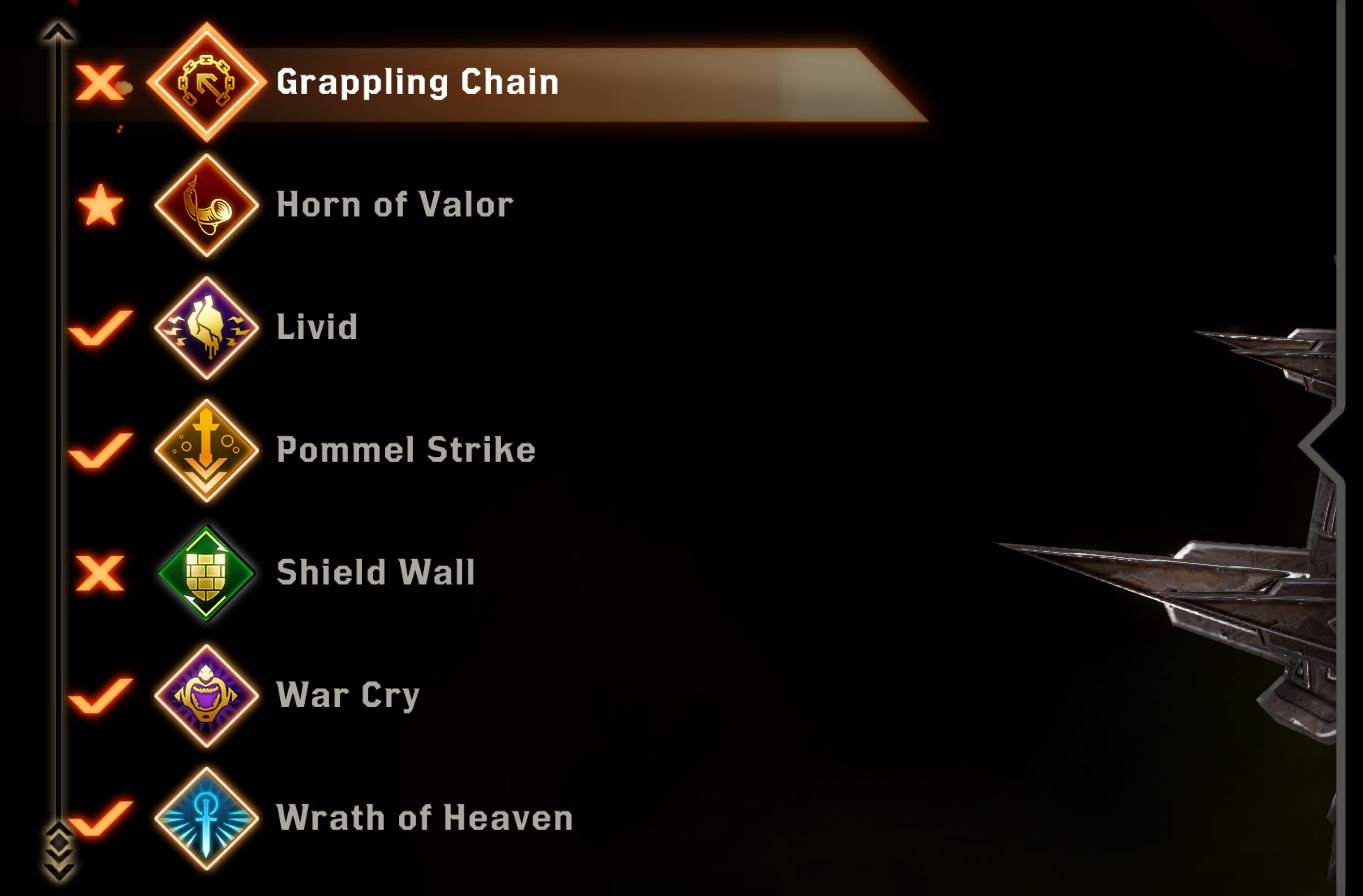 All other abilities should be disabled. Important note: use Spellpurge manually when enemies are spawning from the Veil Tears. This way you will lower the number of demons spawned.

Thank you for reading this guide. I hope it will help you to fully understand how to best build Cassandra in Dragon Age Inquisition. The post goes into great detail on her skills and tactics that should be used

if I have missed anything, feel free to leave a comment below

She is a magic stopping support system for what ever mage is in your party. Her whole roll as a templar is to stop magic. You wanna maximize her build that not a dps tank which is counter productive to being a tank

I agree with you! Sadly, some people want to have Cassandra as a Tank in the party (and the only warrior at that).

So I want to offer them what I think is the best option. I may revisit the build later on to see what can be done better :)

Would love to hear your feedback if there is any information lacking or if there are too much info.

2h tank is very hard. If u play with all trials especially Rub Some Dirt on It. Anyway - thank you.

Support Gamestegy
And get benefits: