This post covers the Best Adept build in Mass Effect 2 and Mass Effect 2 Legendary Edition. This is a class that special implants to create small singularities. This ability allows them to disable and kill enemies using biotic fields.

Unfortunately, this class lacks advanced combat training, which may make them weaker in weapon combat compared to other classes.

This build concentrates on what the Adept class can do best - creating biotic fields. You will constantly use abilities like Pull and Singularity to break enemy formation or stunlock them. Once their protections are down you will be able to create combos that throw them off the ledges or to the ceiling.

Of course, the build also uses weapons, they play an important role - removing enemy protections. Once that happens your Biotic abilities become much more effective. Moreover, during the mid-game, you will be able to unlock more advanced weapons that will make ranged weapon combat better.

For this Adept build to work the best you will also need a good choice of companions that can support you. All of this will be covered in this post.

This section will cover the end-game build squad point allocation for the Adept build. This is a quick overview 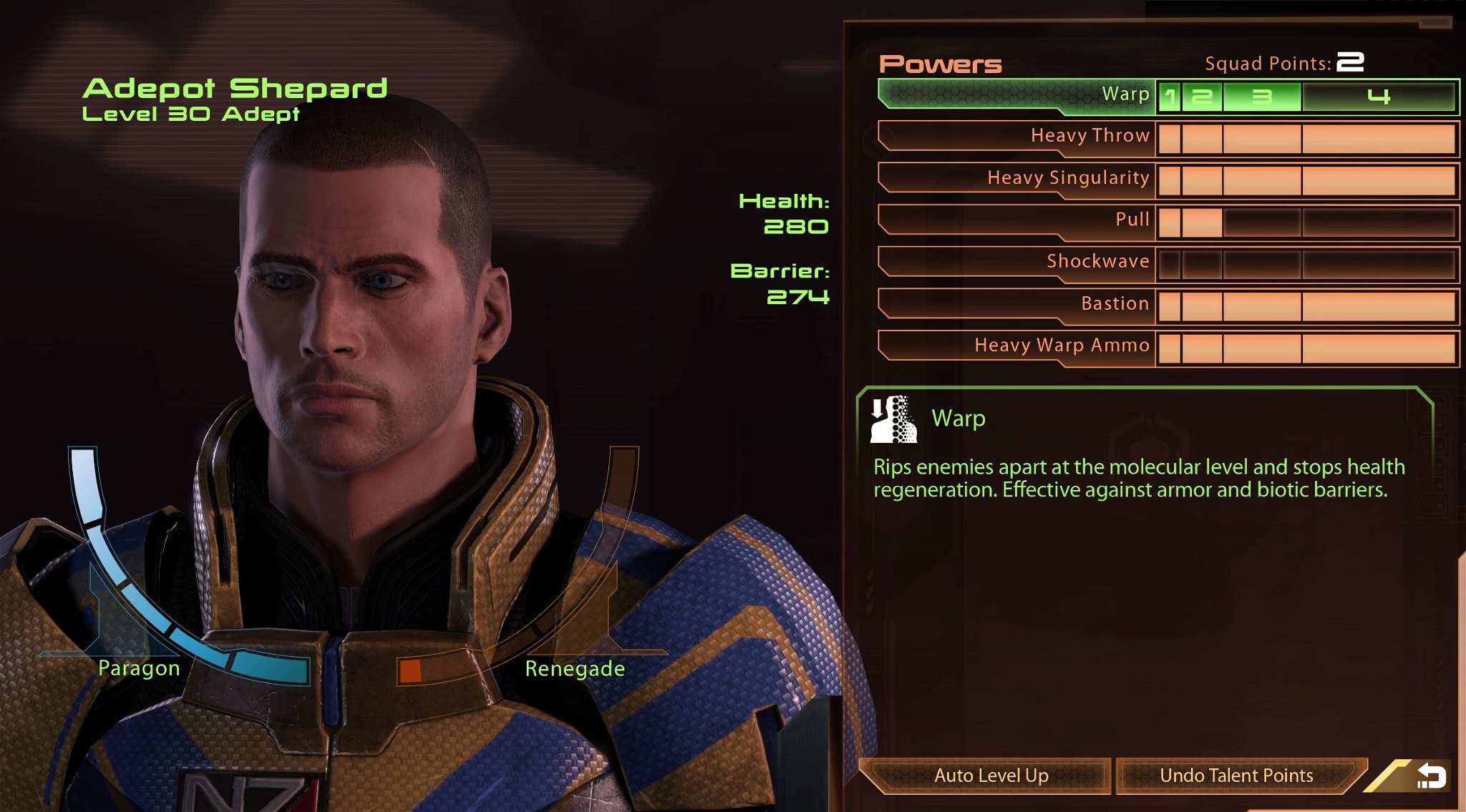 You can forgo one level of Pull and get 4th level Warp. Unfortunately, this will mean that pulled enemies will be floating for only 5 seconds. In theory, this should be enough as your cooldown will be less than 3 seconds. However, in case you are under enemy fire or projectile traveling distance is long the effect may wear off.

Due to this, I only have a level 3 Warp. Moreover, as you will see in the Tactics section it is only used in specific situations and Biotic detonation is done by companions.

For Adept build, there are multiple bonus powers that I suggest based on the situation.

As an alternative to Overload Lv 4, you can also take Warp Lv 4. It will greatly improve your offensive capabilities against barriers and armor and will be invaluable on the last mission.

In this section, I would like to go through some tips on how to best utilize the Adept Build in Mass Effect 2.

Singularity for any situation

This is the most powerful ability that Adept has. What makes it special is that it works both on protected and unprotected enemies. Of course, protected enemies are a bit more difficult to deal with. However, if they come in contact with the ability here is what happens:

Even though enemies can do some actions they are constantly being interrupted. This allows Adept to also be effective when enemies are with their protection. They also take constant damage, albeit small.

Unfortunately, this will not work on some enemies like Geth Prime, YMIR mech, etc.

Once enemy protection is down and they are still in the singularity field they will be lifted. This can now be exploited with Warp or Throw for some sweet Biotic combos.

Before playing adept I mainly used Biotic Explosions using Warp as a detonator. However, using Throw opened up new opportunities. What makes it special is its low base Cooldown of just 3 seconds. This is without any upgrades.

With the correct targeting angle, you can send enemies flying to the ceiling, walls, and ledges. It is a very satisfying ability once you learn how to use it.

Have in mind as with all Biotic abilities to activate you need enemies to be without protection. Also, Throw by itself when used on non-lifted enemies will not be as effective. So have this in mind when planning your next move.

This is probably the most popular combo in the game. One needs to use Warp on enemies that are affected by Biotic fields and are floating in the air. Once these conditions are met applying Warp with either Adept or companion will detonate an explosion.

This explosion deals AOE damage damaging not only the target but also nearby enemies. Check in the video below how the upcoming LOKI mech has its armor damage from the explosion:

As you can see I use Adept's Singularity to set up the Biotic field and then Miranda to detonate it.

Adept has Warp ability that can be used in multiple situations:

However, the big drawback of using it with Adept is the long cooldown. Once you use it you will not be able to use another ability for 6 seconds. On Insanity difficult this can mean life and death.

Due to this, to detonate Biotic explosions use companions Warp ability. This way you can constantly create biotic fields with Pull, Singularity, and Throw.

However, I still take this biotic ability. Why is that? This ability comes very handy on boss-like enemies: Harbinger, YMIR mechs, etc. Because these enemies have strong protections using Warp will greatly improve your DPS against them.

During the Collector Ship mission, you will be able to obtain Advanced Weapon Training. This means that Adept can start using assault rifles, shotguns, and sniper rifles.

This section will cover recommended equipment for the Adept Build in Mass Effect 2.

This section will cover what armors I recommend for Shepard Adept Build. There are multiple options and a few things to concentrate on:

Thank you for reading this Adept build post in Mass Effect 2. I hope you enjoyed it and now better understand how to use this stealth class correctly.