This post covers the Best Engineer builds in Mass Effect 2 and Mass Effect 2 Legendary Edition. The Engineer class comes with a unique ability - Combat Drone and AI Hacking. These give some interesting strategic approaches in combat that we will try to explore with the builds below.

This build concentrates on using Controlling and distraction abilities to dominate the battlefield. The build requires you to have unlocked Morinth in any of the playthroughs as we will need her Bonus power when fighting biotic enemies.

Of course, if you are fighting Syntethic ones like Geth or drones you can take any other bonus power.

Generally, the idea is to use any means possible to make enemies fight themselves or your drone. This way they are distracted and you can take them out one by one.

This section will cover the end-game build squad point allocation for the Engineer build. This is a quick overview 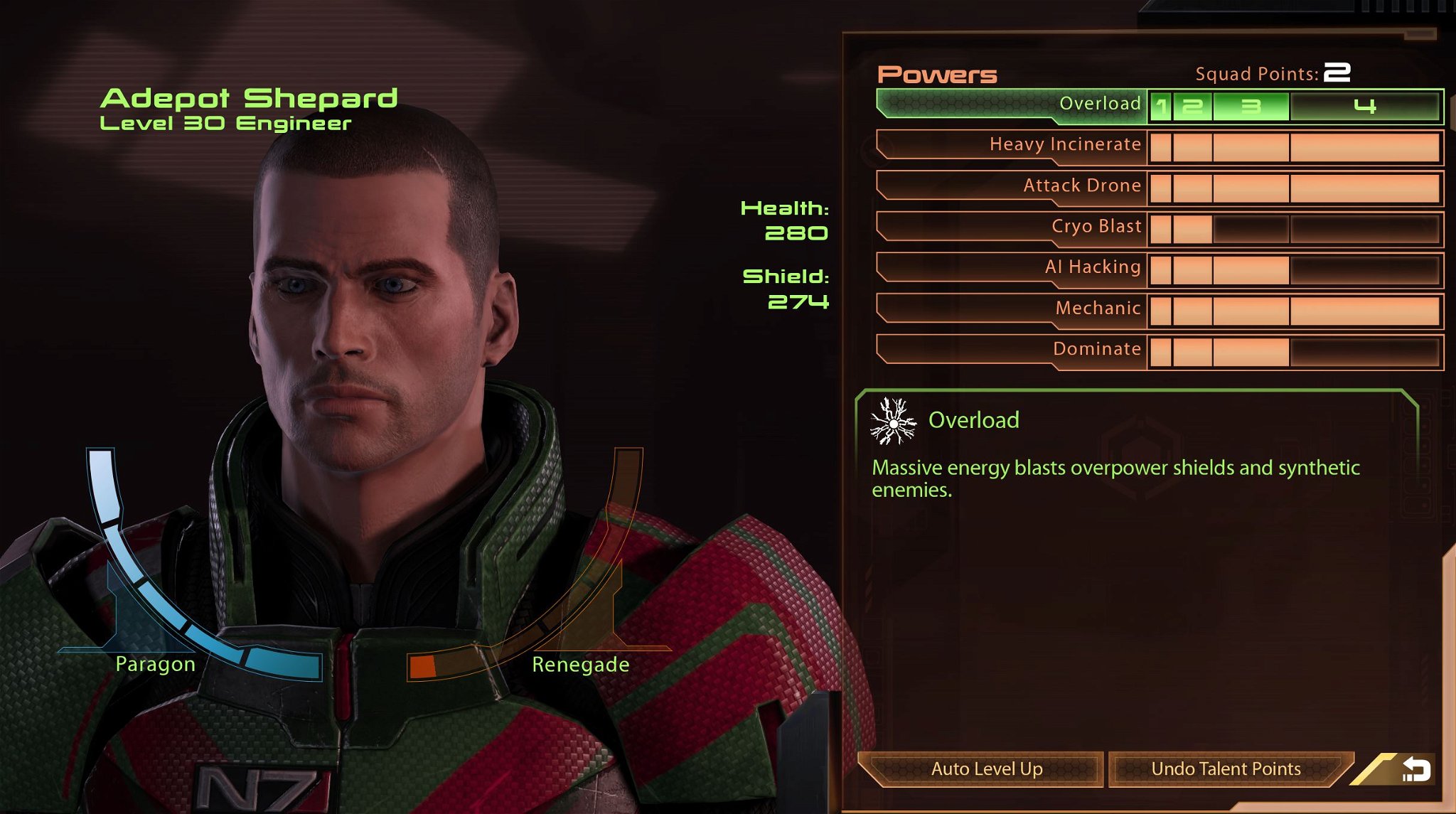 For a mission, you should have either Dominate Level 3 or AI Hacking Level 3. Generally, there are not many missions where you will have both types of these enemies.

For Engineer build, there are multiple bonus powers that I suggest based on the situation.

There are some caveats with this build progression. The thing is that AI Hacking ability only works on Synthetics. To use the controlling ability on organics you will need Dominate. So here is my suggestion

Get Dominate Lv 2 as soon as you can. You will need to have unlocked Morinth either in the current or previous game. This way you will be effective in most missions where you fight against organic enemies. However, for missions that consist of Synthetic enemies like drones or Geth have at least  AI Hacking Lv 2 (level 4 is preferable)

Here is a general progression that I recommend for the Engineer Build:

After you have these, you can then maximize your squad point allocation and have both AI Hacking and Dominate level 3 at the same time. You will not need to respec every other mission.

In this section, I would like to go through some tips on how to best utilize the Engineer Build in Mass Effect 2.

For this build to work you will either need to use AI Hacking or Dominate. Having both of these early and mid-game may be costly. Due to this, I recommend to respec based on the enemies you plan on fighting:

However, respec is quite costly and costs Element Zero. So be sure to scan planets and collect as much of it as you can.

This is a very powerful ability that serves one purpose - to draw enemy attention. Although it deals damage, it is negligible compared to you or your allies.

However, it is very effective at wasting the enemy's time. In addition, it can interrupt enemy attacks, making them deal overall less damage.

Just have in mind, that it will not stay alive for long, and should have a plan for your next step.

Use Controlling abilities to their fullest extent

This build revolves around using AI Hacking and Dominate to control both organic and Synthetic enemies. Once they are under control other enemies will start fighting them. This is a perfect opportunity for you to release multiple volleys of shots.

Moreover, the controlled enemy will get bonus protection so that they would not die instantly. I recommend taking control of the enemy with the lowest HP.

Have your companions help

Companions are very important for this build. You want to have someone who can easily take out any protections for normal enemies: barriers, armors, and shields. Once that is done you can instantly use dominate ability without wasting any time on offensive abilities.

Use everything to create havoc

With all the tips above you should have an enjoyable time using this build:

During the Collector Ship mission, you will be able to obtain Advanced Weapon Training. This means that your Engineer can start using assault rifles, shotguns, and sniper rifles.

Unfortunately, this build comes with some drawbacks that I want to mention. The big problem is that this is a defensive playstyle. This means that you will not be constantly in the enemy's face and your damage will not be as high, not until higher levels or advanced weapon training.

Have this in mind as some fights will prolong due to the enemy control.

This section will cover recommended equipment for the Engineer Build in Mass Effect 2.

This section will cover what armors I recommend for Shepard Engineer Build. There are multiple options and a few things to concentrate on:

Thank you for reading this Engineer build post in Mass Effect 2. I hope you enjoyed it and now better understand how to use this stealth class correctly.

Glad to hear that!